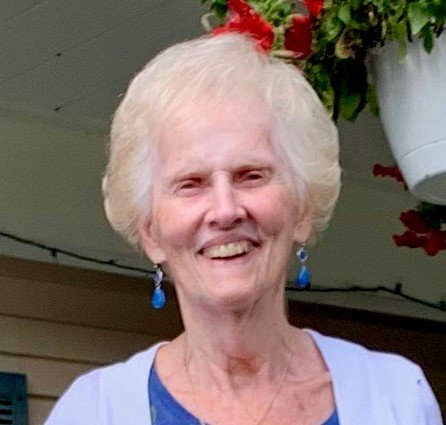 Regina English Paoni 1934 – 2020 CLINTON – Regina English Paoni, 85, a resident of the Brookdale Apartments, formerly of New Hartford, passed away Sunday, July 26, 2020 at Faxton-St. Luke’s Healthcare Center in New Hartford. Regina was born November 17, 1934 in Utica, NY, the daughter of Charles F. and Dorothy (Stoddard) Lubey. She was raised and educated locally and went on to attend Le Moyne College. On June 18, 1955, Regina married James B. English in Utica and shared a union just short of 40 years until his passing in 1994. Regina found love again and married Benjamin Paoni on July 19, 2002 in New Hartford, sharing the next 12 years until his passing in 2014. Regina had been active in her community her entire life. She had belonged to St. Elizabeth’s Women’s Guild; she volunteered with Hospice & Palliative Care and was a facilitator of their bereavement walking group (where she met her second husband, Benjamin); a former member of St. Thomas Catholic Church in New Hartford and a member of their Women’s Club as well as a founder of their Pro-Life Group; along with her husband, Ben, she was involved with various Veterans Organizations; prior to the Covid-19 pandemic, she was a regular communicant of St. Mary’s Church in Clinton with the residents of the Brookdale Apts.. Regina greatly enjoyed summering with her husband, Jim, and family, on Fourth Lake in the Adirondacks, especially having her morning cup of coffee by the lake. She also enjoyed playing bridge with her friends, belonging to clubs while living in New Hartford, and later while residing at Brookdale. Regina is survived by a son and daughter-in-law, Daniel and Cindy English, Clinton; three daughters and sons-in-law, Mary Ellen and Stan Cehonski, Verona, Patti and Mark Siegenthaler, Maine, Ruth and Steve Rolewicz, Vernon; 12 grandchildren, Valerie Edwards, James Cehonski, Pamela English, Matthew English, Christopher English, Amanda Harris, Brenna Johnston, Megan Siegenthaler, Stephen Einfalt, Nikki Einfalt, Carly Einfalt, and Morgan Rolewicz; 4 great-grandchildren, Hunter Harris, Anderson Harris, Oliver English, and Alexander Henry; one sister, Patricia Sloan, Utica. Also surviving are several beloved nieces, nephews, cousins and many great-nieces, great-nephews and dear friends. Mrs. Paoni’s funeral will be held on Friday, July 31, 2020 at 10:30 am at St. Mary’s Church in Clinton, where her Mass of Christian Burial will be celebrated. Interment will take place in Mount Olivet Cemetery, Whitestown. Those wishing may donate to Hospice & Palliative Care, Inc. in Regina’s memory. Arrangements are entrusted to R.P. Heintz Funeral Service, Inc., 10 East Park Row, Clinton. Online memorial and guestbook available at www.rpheintzfsi.com.
Friday
31
July

Share Your Memory of
Regina
Upload Your Memory View All Memories
Be the first to upload a memory!
Share A Memory
Send Flowers
Plant a Tree