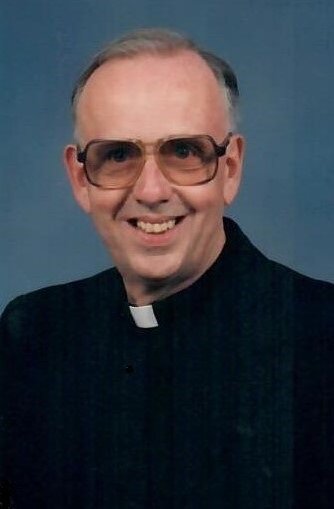 Rev. Vincent J. Kelly 1931 – 2021 Oriskany Falls – Rev. Vincent J. Kelly, 90, former pastor of St. Joseph’s Church, Oriskany Falls, passed away Monday, April 26, 2021 at Faxton-St. Luke’s Healthcare Center in New Hartford. Father Kelly was born February 17, 1931, in Utica, the son of Francis and Theresa (March) Kelly. He was raised and educated in Utica, graduating from St. Francis de Sales High School in 1949. Father Kelly then attended St. Andrew’s Seminary and graduated from St. Bernard’s Seminary in Rochester in 1957. Father Kelly was ordained at the Cathedral of the Immaculate Conception in Syracuse by Bishop Walter Foery on February 2, 1957. Father Kelly served as Associate Pastor for St. Patrick’s Church, Clayville, 1957; St. Paul’s Church, Oswego, 1958; St. Mary’s Church, Baldwinsville, 1958; St. Peter’s Church, Rome, 1968; St. Anne’s Church, Manlius, 1971; St. Theresa’s Church, New Berlin, 1973. He then served as Pastor of St. Mary’s Church, Clinton from 1975 – 1992; and St. Joseph’s Church, Oriskany Falls, from 1992 until his retirement. (Although he said Sunday Mass at St. Joseph’s right up until his passing.) Father will be remembered for his calm demeanor and his scholarly nature. While at St. Mary’s Church in Clinton, he wrote a book about the history of the church called “Never Left Unaided”. He was beloved by the parishioners of St. Mary’s and St. Joseph’s and he will be greatly missed. Father Kelly is predeceased by three brothers and two sisters-in-law, Robert and Ann Kelly, Edward and Helen Kelly, Rev. Msgr. William Kelly; three sisters and two brothers-in-law, Frances Kelly, Mary and Albert Vandewater, Carolyn and Monroe Wagner. He is survived by many nieces, nephews, great-nieces and nephews, and great-great nieces and nephews as well as many dear friends. Father Kelly’s Funeral Mass will be held on Saturday, May 1, 2021 at 10:00 am at St. Mary’s Church in Clinton where his Mass of Christian Burial will be celebrated by the Most Reverend Douglas Lucia, Bishop of the Syracuse Diocese. Interment will follow in St. Joseph’s Cemetery, Utica. Visitation will be held at St. Joseph’s Church in Oriskany Falls, Friday evening, from 4 – 7 pm. The Vigil Service for Deceased Priest will be held at 7:00 pm with Reverend Jason Hage celebrating at the conclusion of the visitation. Additional visitation will be held from 9:00 am until the time of the Mass, Saturday morning, at St. Mary’s Church. Live streaming for the Vigil service Friday evening is on Facebook “@route20catholic”. The Funeral Mass will be live streamed as well at http://www.stmarys-clinton.com. Those wishing may donate to Notre Dame Jr./Sr. High School in Father Kelly’s memory. Arrangements are entrusted to R.P. Heintz Funeral Service, Inc., 10 East Park Row, Clinton. Online memorial and guestbook available at www.rpheintzfsi.com.
Friday
30
April

Share Your Memory of
Rev. Vincent
Upload Your Memory View All Memories
Be the first to upload a memory!
Share A Memory
Send Flowers
Plant a Tree