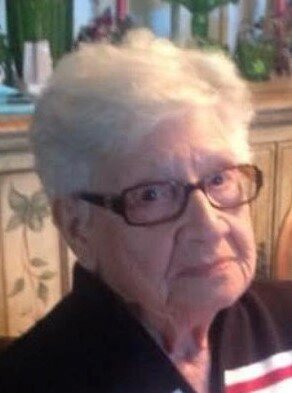 Please share a memory of Anna to include in a keepsake book for family and friends.
View Tribute Book
Anna LaBonte 1926 – 2021 Floyd – Anna LaBonte, 95, formerly of Floyd, NY, passed away Tuesday, October 19, 2021. Anna was born March 5, 1926 in Munich, Germany, the daughter of Joseph and Anna Falk. She was raised and educated in Germany. Anna served as a firefighter during World War II, tasked with getting survivors out of buildings. Anna moved to the United States and was employed with the Rome DDSO until her retirement. She continued to work cleaning houses and also babysat for two families. Anna kept busy with these things, so when she would relax, she enjoyed knitting. She is a former member of St. Leo’s Church in Holland Patent. Anna was lovingly known as “O’Ma” by her family and friends. Anna is survived by her daughter, Hilda Masi, Whitesboro; her granddaughter, Rhonda (& Rick) Malerba, Westmoreland; her grandson, Anthony Masi, Georgia; and three great-grandchildren, Savannah, Christopher, and Ariana. She is predeceased by a daughter, Diane LaBonte; a granddaughter, Melinda Rose Masi; and two sisters, Maria and Theresa; and a brother, Joseph. Ms. LaBonte’s funeral will be held Tuesday, October 26, 2021 at 10:30 AM at Church of the Annunciation, Clark Mills where her Mass of Christian Burial will be celebrated. Interment will follow in Floyd Cemetery. Those wishing may donate to St. Jude Children’s Hospital, 501 St. Jude Place, Memphis, TN 38105-9959 in Anna’s memory. Arrangements are entrusted to R.P. Heintz Funeral Service, Inc., 10 East Park Row, Clinton. Online memorial and guestbook at www.rpheintzfsi.com.
Tuesday
26
October

Share Your Memory of
Anna
Upload Your Memory View All Memories
Be the first to upload a memory!
Share A Memory
Send Flowers
Plant a Tree