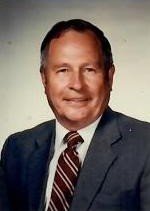 Please share a memory of Joseph to include in a keepsake book for family and friends.
View Tribute Book

Oriskany Falls – Joseph F. Sefcheck, 93, from Oriskany Falls, passed away Friday, July 20, 2018 at the Masonic Care Community in Utica, with his family by his side.

Joseph was born April 26, 1925 in Smock, PA, the son of Joseph and Louise (Zayance) Szewczyk.  He was raised and educated in Pennsylvania.  Joseph went on to serve his country with the US Navy during World War II in the European and Asiatic-Pacific Theaters.  On April 29, 1950, Joe married Geraldine Creedon in St. Joseph’s Church in Oriskany Falls, sharing a union of 58 years until her passing in 2008.  He owned and operated his own business, Specialty Home Furnishings, for many years.  He was also employed with Vantine Studios as a regional manager.  Joe’s life included many years of public service.  Joseph served as Mayor of Oriskany Falls; as School Board Member; as Trustee of St. Joseph’s Church; he was an exempt member of Oriskany Falls Fire Dept.; a Life Member and Past Commander of Kelley Phillips American Legion Post # 569, Oriskany Falls; and Life Member and Past Vice Commander of Schilling, Burns, Young VFW Post # 9591, Clinton.  He also has many friends at the Helmuth-Ingalls American Legion Post # 232, Franklin Springs and the Clark Mills American Legion Post # 26.

Mr. Sefcheck’s funeral will be held on Tuesday, July 24, 2018 at 10:00 am at St. Joseph’s Church in Oriskany Falls where his Mass of Christian Burial will be celebrated.  Interment, with Military Honors, will follow in St. Joseph’s Cemetery, Oriskany Falls.  Relatives and friends may call at the R.P. Heintz Funeral Home, 10 East Park Row, Clinton from 4 – 7 pm, Monday evening.  The Kelley Phillips American Legion Post # 569, Oriskany Falls will conduct their services at 6:45 pm.

Those wishing may donate to St. Joseph Church, Oriskany Falls or to St. Bernard’s Church, Waterville.

The family offers a special thank you to Dr. Francis Chabot and his staff in Waterville for the many years of care and friendship, including most recently those special hospital visits.  Also, to Dr. McCormick and to the individuals at the Masonic Care Community that cared for Joe these last few months.  The kindness and compassion shown was appreciated and will always be remembered.

Share Your Memory of
Joseph
Upload Your Memory View All Memories
Be the first to upload a memory!
Share A Memory
Send Flowers
Plant a Tree