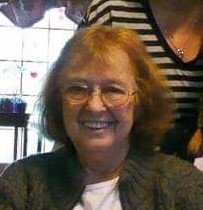 Please share a memory of Jean to include in a keepsake book for family and friends.
View Tribute Book

Westmoreland / Clinton – Jean R. Dullin, 87, a resident of the Katherine Luther RHC & RC, formerly of Westmoreland and of Clinton, passed away Thursday, September 5, 2019 at the home with her family by her side.

Jean was born on May 28, 1932 in Ogdensburg, NY, the daughter of Morris J. and Rita (Jenner) Mehaffy.  She was raised and educated in Ogdensburg and went on to graduate from St. Luke’s School of Nursing.  She began her career as an RN with St. Luke’s Hospital before moving on to work in the Health Center at Hamilton College.  On October 23, 1954, Jean married Frederick C. “Fritz” Dullin, Jr. in St. John the Evangelist Church in New Hartford, sharing a union of over 53 years, until his passing in 2007.  Jean is a former member of St. Mary’s Church in Clinton, a member of the Helmuth-Ingalls American Legion Post 232 Ladies Auxiliary, Franklin Springs, and of the Beaver Flow Fish & Game Club at Stillwater Reservoir.  Jean would meet regularly with her St. Luke’s School of Nursing Alumni.  She enjoyed playing cards and loved camping at Beaver River.

Mrs. Dullin’s funeral service will be held on Wednesday, September 11, 2019 at 11:00 am at the R.P. Heintz Funeral Home, 10 East Park Row, Clinton.  Interment will follow in Mount Olivet Cemetery, Whitesboro.  Relatives and friends may call at the funeral home, Tuesday evening, from 4 – 7 pm.

Those wishing may donate to your local humane society in Jean’s memory.