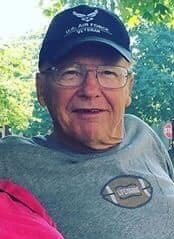 Please share a memory of Leonard to include in a keepsake book for family and friends.
View Tribute Book

Len was born May 28, 1943 in Rome, NY, the son of Leonard and Ella Mae (Morris) Williams.  He was raised and educated in Clinton, graduating from Clinton High School, Class of 1962.  Len went on to serve his country with the US Air Force during the Vietnam War.  On January 1, 1966, Len married Marlene MacLean, sharing a union of almost 54 years.  He had been employed with Jay-K Lumber in New Hartford, and later with Walmart Distribution Center in Marcy, from where he retired.  He was a member of St. Mark’s Episcopal Church in Clark Mills, before its closing and a member of the Clinton-Hampton Masonic Lodge #347 in Westmoreland.  He was an avid SU sports fan, following football and basketball.  Len especially loved going to his son’s and his grandson’s football games through the years and also greatly enjoyed coaching his sons and their teammates with the Clark Mills Firebirds Little League baseball team.

A memorial service will be held at the Clinton United Methodist Church on Friday, December 6, 2019 at 11:00 am.  Interment will take place at the convenience of the family.  Relatives and friends may call at R.P. Heintz Funeral Service, Inc., 10 East Park Row, Clinton, Thursday evening, from 4 – 7 pm.

Share Your Memory of
Leonard
Upload Your Memory View All Memories
Be the first to upload a memory!
Share A Memory
Send Flowers
Plant a Tree