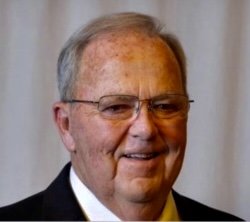 Please share a memory of Charles to include in a keepsake book for family and friends.
View Tribute Book
Charles Engle 1946 – 2020 ORISKANY FALLS - Charles (“Chuck” or “Charlie”) Raymond Engle, 73, of Oriskany Falls, died Thursday evening at home. A life-long resident of Oriskany Falls, he is survived by Judy, his wife of 50 years, three children, two sons-in-law, one daughter-in-law and five grandsons. Surviving children are Chris Engle and his wife, Michele, of Clinton; Susan Jones and her husband, Tim, of Waterville; and Sarah Alvey and her husband, Justin, of Baldwinsville. Surviving grandsons are Cale Engle, Cam Engle and Caden Engle of Clinton and Sam Jones and Archie Jones of Waterville and a grand dog Lt. Blue of Baldwinsville. Chuck was preceded in death by his mother, Lucy Finnegan Engle, his father, Charles Engle, and a beloved uncle, Erwin “Junie” Engle. Memories of Chuck bring an instant smile to his family and friends. Whether you were a friend of seventy years or seven, Chuck always had a funny anecdote or memory to share. His first love was his family. He was a devoted husband and father who held his children to a high standard. That faded over the years and his grandchildren could do no wrong. A quick glance at them as toddlers would bring an instant chuckle. In later years, he looked forward to, and rarely missed an opportunity to watch them compete in soccer, hockey and baseball. A physical education teacher, NASCAR enthusiast and avid sports fan, Coach Engle was best known as the boys soccer coach at Mount Markham High School in West Winfield. When he stopped coaching after 48 years in 2016, Coach Engle had the most wins by a soccer coach in New York high school history. His teams won 654 games, 13 sectional titles, four regional titles, 11 league and division championships, and his 1986 team was state Class C runner-up. A recipient of Mount Markham’s distinguished service award in 2017, Coach Engle was a member of the New York State Public High School Athletic Association (NYSPHSAA) Hall of Fame, the NYSPHSAA Boys Soccer Hall of Fame and the Greater Utica Sports Hall of Fame. He was named national small school coach of the year by the National Soccer Coaches Association of America (NSCAA) and received the organization’s New York coach of the year award three times. Chuck was also active in sports administration, serving as the NYSPHSAA Section III boys soccer coordinator for 25 years. Upon his retirement, he received Section III’s lifetime achievement award. An old-school coach, Coach Engle was a disciplinarian who did not coddle players. The strict approach earned his players’ respect. In time, respect became affection. Years removed from high school, gray-haired former players went out of their way to help Coach. This included installing railings on his deck and arriving at his house with pizza to watch ball games. Mr. Engle’s Funeral Mass will be held Thursday, November 19, 2020 at 10 a.m., at St Joseph's Catholic Church in Oriskany Falls, where his Mass of Christian Burial will be celebrated. Visitation will be held Wednesday evening, from 4 - 7 p.m. at R.P. Heintz Funeral Service, Inc., 10 East Park Row, Clinton. In lieu of flowers, the family asks that donations be made to the Oriskany Falls Volunteer Fire Department or the Coach Engle Scholarship Fund to be set up at Mt. Markham. Donations for the Scholarship Fund can be sent to Judy Engle, PO Box 135, Oriskany Falls, NY 13425. Online memorial and guestbook available at www.rpheintzfsi.com.
Wednesday
18
November

Share Your Memory of
Charles
Upload Your Memory View All Memories
Be the first to upload a memory!
Share A Memory
Send Flowers
Plant a Tree