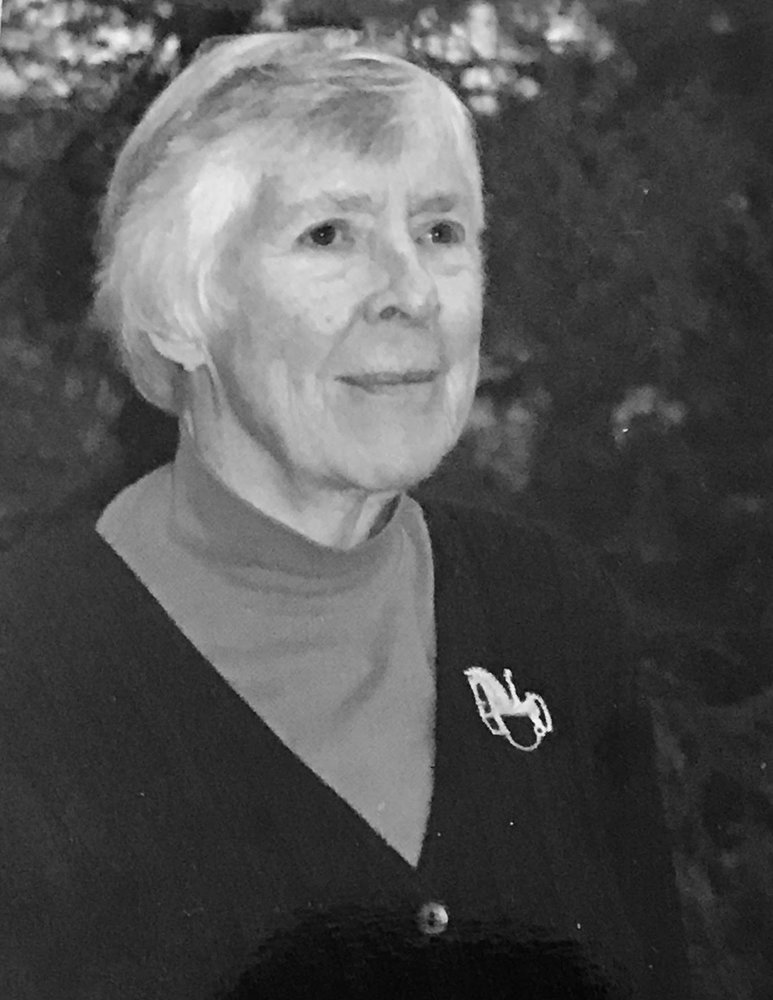 Please share a memory of Margaret to include in a keepsake book for family and friends.
View Tribute Book
Margaret C. Evans 1923 - 2019 Saratoga Springs/Clinton - Margaret (né Harvey Carpenter) Evans of Saratoga Springs NY died peacefully in her sleep December 12, 2019. She was 96. Peggy was born February 2, 1923 to Beatrice (né Geraldine Harvey) and Irving Clifford Carpenter in New Rochelle NY. She graduated from Pelham High School, and while in her teens, learned to ride horses and began her riding career. She went on to compete very successfully at the national level, winning trophies and championships from national horse shows including Madison Square Garden in New York. She went on to graduate in 1944 from Connecticut College and afterwards worked as a physical therapist in the United States Army in Texas during WWII. While in Texas, to satisfy her daring and independent spirit, she learned to fly single engine planes. She particularly enjoyed stunts, like barrel rolls and loop de loops. At the end of the war, Peggy went to graduate school at Columbia University on the G.I. Bill where she received her Master’s degree in English literature. She worked first for Bloomingdales in New York City, and when her family moved to Clinton NY, she became a reporter for the Clinton Courier where she published articles on local sports, including the Clinton Comets. On June 14, 1952, she married Dr. Richard D Evans and moved to Utica, NY. Together they had four children. Her daughters inherited her love of horses and soon learned to ride. In 1968 she bought property on Craig Road in Clinton NY, where she built and managed Sky Step Farm, fulfilling her dream of training thoroughbreds and teaching people to ride with a stable of 40 horses. Later, Peggy moved to Vermont, fulfilling another dream. In 1985 she purchased 10 acres of protected, peaceful land from Ed Osmer and designed a beautiful home. She lived in Hartland, Vermont for over 30 years on her own. During this time, she researched and wrote the biography of Rosemond Tuve, her favorite teacher from Connecticut College and an international scholar of 16th and 17th century English literature, whose life story from the prairies of South Dakota to the first woman lecturer in the English departments of Harvard and Princeton proved a fascinating and instructive study. The biography was published in 2004 by Peter Randall of Portsmouth, NH. Peggy was a devoted Red Sox fan. She followed every game and converted family members with trips to Fenway Park a few times each season. She seldom missed the morning show “Breakfast with the Sox” for game analysis. When the baseball season ended, she cheered on generations of Duke basketball teams and the New England Patriots. Additionally, Peggy loved the outdoors and was dedicated to her daily walks along the many trails near her home in Vermont. She had the eye of an ornithologist as she watched and identified the large variety of birds that visited her feeder. Peggy enjoyed music and made frequent trips to New York City for the opera and to Saratoga Springs, NY for ballet and orchestra performances at SPAC. While living in Vermont, she joined the Thetford Chamber Singers and performed with the chorus. Finally, in 2010, she moved to Saratoga Springs, NY to be closer to her daughter Mary and where she could continue her support and love for the arts. She leaves behind four children and their families: Richard and Debra Evans in Davenport FL, Drs. Jean and Jerry Oakes in Alabama and Hartland VT, Mary Evans and Tom Reagan in Saratoga Springs NY, Andrew Evans in Grand Isle VT, as well five grandchildren: Matthew and Hayley Oakes in GA, Peter Oakes in AL, Trapper Evans and Sara in ME, Glenn Evans in NH, and Colin Evans in Nantucket, and two great grandchildren, Carson Evans and Natalie Evans in ME. In lieu of flowers, memorial contributions may be made to Connecticut College or the Thoroughbred Retirement Foundation at https://trfinc.org. A graveside service will be planned at a later date in the spring of 2020. Arrangements are entrusted to R.P. Heintz Funeral Service, Inc., 10 East Park Row, Clinton NY. Online memorial and guestbook available at www.rpheintzfsi.com.